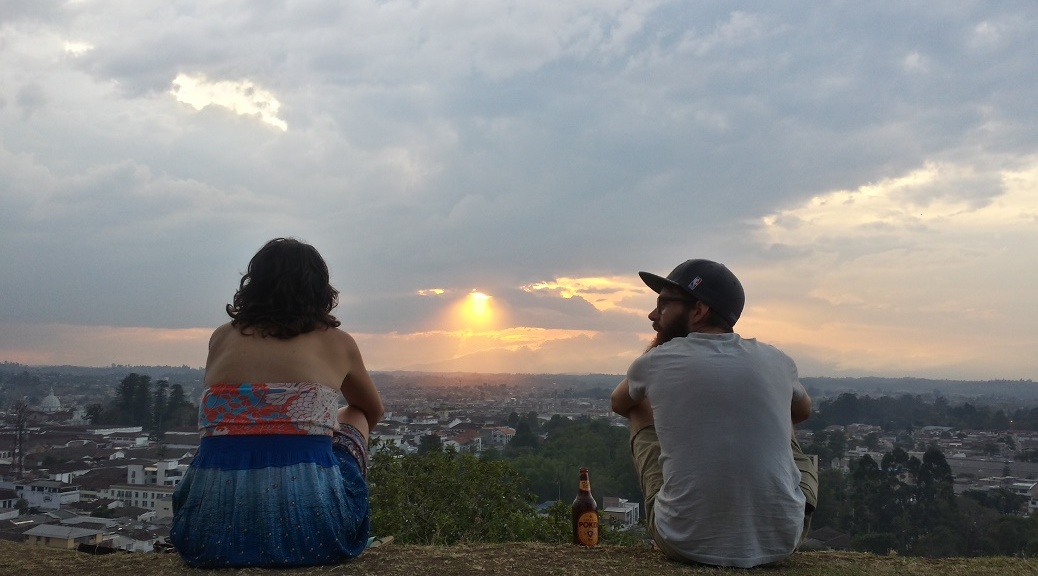 We started our South American travels in Cartagena, on Colombia’s north coast. At that point we spoke bugger-all Spanish and didn’t have any other South American country to measure it against. Having spent the last 4 months in Peru, Bolivia and Ecuador, we are confidently calling it – Colombia is our favourite.

When we crossed the border from Ecuador the relief was palpable. Colombia is so comfortable and safe. It’s definitely the safest we’ve felt in any of those 4 countries. Which may sound hard to believe if you’re reading this from Australia or the States where all we know about Colombia is based on shows like Netflix’s Narcos, or Sofia Vergara’s character in Modern Family (‘Do you know what a doll is in my village? An apple on a fork!’).

Here’s the thing with Colombia: the people are effing incredible. Usually, statements like this piss me off. When people say ‘oh, Australian’s are so friendly!’ I roll my eyes and think nothing of it – in the rather large sample size of Australians I’ve met there’s been enough arseholes for me to give no credit to this kind of statement. So when Lonely Planet lists ‘the people’ as one of Colombia’s greatest assets, I thought it was ridiculous.

Having now spent two chunks of time in Colombia, I have changed my mind.

Random people in the streets are nice

We were in a restaurant chatting inanely when a lady at another table asked us what language we were speaking. I said English, she asked where we were from, I said Australia, she was chuffed and welcomed us to Colombia.

We did a walking tour in Medellin (very highly recommended by everyone who’s done it). At one point a local (possibly homeless) man came and interrupted the guide with something. The guide gestured for him to just wait one moment. The man stood right next to the guy nodding in agreeance with everything he said (despite not knowing a lick of English) until he finished. We went to walk off when the man grabbed the sleeve of the guy and very seriously asked him something. The guide says, “Oh, everyone: this man says he’s glad that you’re visiting and you’re very welcome in our city”. The man was beaming, nodded and waved to us all and then walked off. It was so sweet.

If they’re not a stranger, they’re a friend

Everyone Colombian we’ve met and had a conversation with has been a total gem. We stayed at the most wonderful homely hostel in Bogota – Hopi Hostel – and the staff felt like friends within ten minutes of being there. I’d go and sit in reception with Oskar, the 28-year-old owner, for ages just chewing his ear off and asking questions about Colombia.

All the way back in May on our first visit here we met Sara – a Bogota local and all-round awesome chick. We caught up again with her and her boyfriend Juan (who is a graphic designer for VICE and a DJ – unofficially the coolest person in the world). They took us out for a drive into the countryside around Bogota and showed us around. It was fabulous!

I got a new tattoo while we were there and even Mario, the tattoo artist, was a friend by the time I walked out of the studio. He was so friendly and told us so much about Bogota. He also taught me some very colourful Spanish swear words. Gonorrhoea!

Colombians, as a whole, are amazing copers

We all know that Colombia has been through some absolute shit in the last few decades. Just when they got the narco-terrorism under control the guerrilla warfare kicked things up a notch (my very basic overview of the troubles of Colombia!). All that in mind, these people and this country are kicking goals! They are positive, optimistic, and f**king resilient.

Our walking tour guide in Medellin was explaining that the people don’t want to dwell on the bad stuff that happens, they want to move on. When he was telling us about the Department of Justice building being bombed in the late 80s we had to all huddle around close so no local could hear what he was saying – they would’ve been upset that he was talking about it. Colombia drew with Germany in a soccer match in the 80s – one of their proudest achievements – and the people still like to reminisce about that. Any of the bombings or assassinations during the narco years – never mentioned.

I think their eternal optimism is best observed when it starts to rain. In Popayan – a city in the south – it rains on average 2 out of every 3 days. Bogota has weather like Melbourne. Twice in these cities we got caught in a downpour. We huddled in storefronts with the majority of locals. In London, the moment a rain drop falls umbrellas would pop up and no one would miss a stride. In Colombia, nah! Even when history shows it’s likely to rain, they don’t carry umbrellas, they assume it’s not going to rain and just wait it out when it does! I love it.

Sometimes, things are just a bit too strange to be believed

Hearing about Colombia’s past (and present) is fascinating and at points hard to believe. Everyone seems to just accept that everything is just a little bit mad in Colombia and that’s the way it’s always been. After all, magical realism was created in Colombia.

I was asking Oskar from Hopi hostel about his childhood in the 1990s when things were dire. The apartment building he and his family lived in was bombed, and he remembers being in a park near where a bomb went off. He says it just becomes normal and he didn’t think much of it after a while.

Another prime example was when Tattoo Artist Mario was talking about all the street art in Bogota – Bogota is very street-art friendly and has some world-class pieces. The government is really supportive and even commissions big works on sky scrapers. Mario was explaining that it wasn’t always that way. The turning point was when police shot a teenager in the back when he was tagging something. The people were up in arms and the authorities listened and now the police protect street artists working. Mario said, “So, it took a kid getting shot to change things, but something good came of it… Colombia problems!” and shrugged and scoffed. Everyone’s aware that Colombia works in mysterious ways…

Of course, not everything is perfect…

I had a very rose-coloured view of everything until Sara gave me a good dose of reality. Me saying ‘everyone accepts that Colombia works in a strange way’ is like Sara saying ‘all Australian’s are racist and hate refugees’ – I see why you would think that, but I find it very fucking offensive and don’t like to be lumped in with that. There’s elections coming up next weekend, which Sara and Juan are very sceptical and derisive about. Corruption is rife in Colombian politics, but no one can be bothered to do much about it. It really pisses them off that everyone knows about it but there aren’t enough people who care to stand up and make a stand against it. Treatment of internally displaced people and environmental policy are also of concern.

My other two favourite examples of Colombia being crazy:

Hippos. There’s a motherflippin’ hippo problem in Colombia. Ol’ Pablo Escobar created himself a zoo on his massive country property, Hacienda Napoles. Apparently the hippos found the warm Colombian climate and lack of extreme seasons much to their liking and got pretty busy. Since no one has been looking after the farm for the last 20 years they have bred like crazy, broke out of the grounds and spread all through the river, creating the biggest hippo population outside of Africa. Hippos are nasty bastards but the Colombians are completely accepting of that like the Africans are. There’s reports that families in the area keep little hippos as pets. Bloody brilliant! That story really tickles me.

In Bogota, a typical drink is hot chocolate and cheese. That’s right – they pop a dob of cheese into the hot choccy and swirl it all around. I didn’t try it, but Oskar assures me it’s delicious.

We LOVE Colombia. After 2 visits covering all the major areas, we still don’t feel like we’ve spent enough time there. If there’s a take-home message to this post, let it be this: Colombia is not what you see on TV. Those shows are based on (some pretty crazy) true events, twenty-five years ago. The Colombian people are bloody impressive in their ability to pick themselves up by the bootstraps and move on. It’s an amazing country – the hospitality shown is amazing, and we’ve never felt safer in South America. I’m pretty sure Shania Twain wrote ‘You’re Still The One’ about Colombia: “They said, ‘I bet they’ll never make it’. But just look at us holding on. We’re still together, still going strooooooooong!”

Title Time:  ‘My Favourite Things’ from one of the best ever musicals ever (The Sound Of Music).