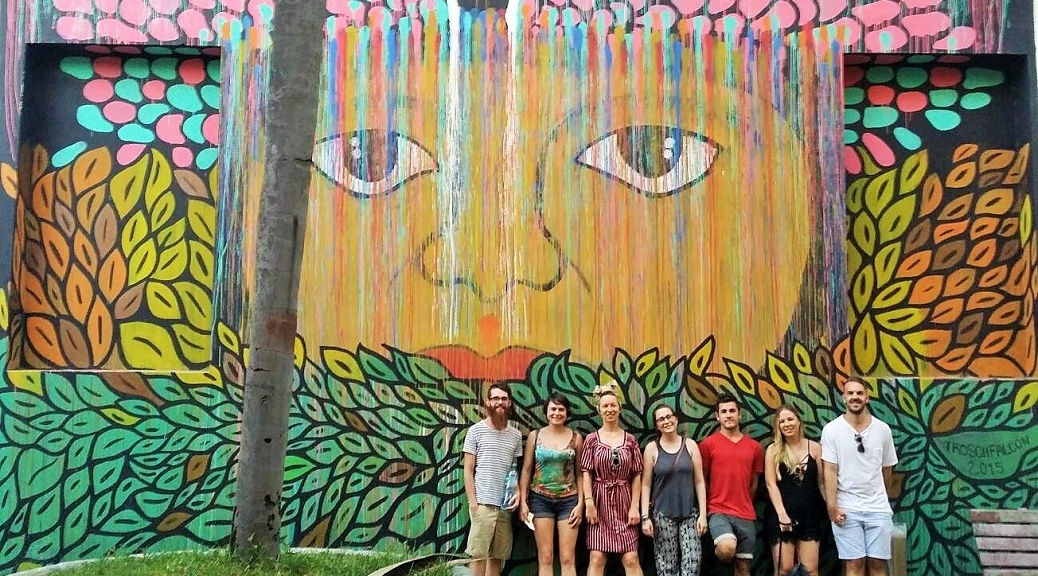 We have just arrived to Bolivia after 6 awesome weeks in Argentina. For the last fortnight we treated ourselves to an AirBnB apartment in Buenos Aires, in which we mostly didn’t set foot outside and generally just enjoyed having a kitchen, bathroom, AND bedroom to ourselves after 8 months of not. We loved BA when we were there for four days with Peckers so it was a no-brainer to go back. Especially because our friends Mary and Kosta were flying in – we weren’t supposed to be seeing them until Christmas, but we thought we’d surprise them.

What I want to share with you is not so much about what we did in Buenos Aires, but rather the strange quirks of Argentina that, after 6 weeks, we still don’t really understand.

Here’s the thing with Argentina and BA – it’s officially expensive, but in reality it’s pretty budget-friendly. Long story short: inflation = people want US dollars. The official exchange rate is 9 pesos for one dollar. But if you stroll down the street and have a chat to one of the guys chanting ‘cambio cambio cambio cambio cambio’ (I think they’d be great didgeridoo players cos they’ve got that circular breathing thing down) you can negotiate a rate anywhere between 13 to 16 pesos to the dollar.

You’ll invariably be led to a kiosk, teddy bear shop, or abandoned shopping arcade where some sketchy man will take your dollars, hand over your wad of lovely purple 100 peso notes and you’ll be on your merry way. Suddenly you’re not paying $20 for a steak, you’re paying $12. And Argentina just got that much more enjoyable.

Luckily we’d heard about this often on the Gringo Trail: ‘If you’re going to Argentina, bring American dollars’. So when we were in Ecuador (where the USD is the official currency) we stocked up. This did mean carrying around $4000 in our backpacks through three countries, but it was worth it.

The daily routine in Buenos Aires has me absolutely stumped. They can’t possibly get enough sleep. Work hours are 10 til 6pm, roughly, and it’s common to have a coffee and croissants at 5pm (looks suspiciously like breakfast). Restaurant kitchens won’t open before 9 and its most common to have dinner around 11pm or midnight (10pm is nursing-home-dinnertime early). If you’re going out for a few drinks after dinner it’s reasonable to be out til the early hours. Nightclubs don’t open until 2am.

A friend we met in Mendoza who is American but lives in BA corroborated this: she was taken on a dinner date; picked up at 11, had dinner, went to a bar for a few drinks, and was dropped home at 5:30am! We met her for a casual bottle of wine one night, at the modest Argentinian hour of midnight. A family came into the bar for nibbles and a wine at 1. ONE AM! WITH 8 YEAR OLD CHILDREN! What is this, Buenos Aires?!

The first night Mary and Kosta arrived we went out for drinks to celebrate. We got home at 6am. The sun was up. What a mind-f**k. I don’t think I’ve ever been out that late even in my prime partying uni days.  The next day we were feeling a bit dusty so we just had a nice dinner. We got home at 2am. That city is a time warp.

The other thing is their diet. When you’re internationally renowned for great steak and barbecue I guess you have to keep up a reputation. But would it kill you to throw in some veggies? The figure is 60kg per person per year of red meat. That gives me meat sweats just thinking about it.

On top of that their breakfast spread of choice is dulce de leche. Dulce de leche is best described as the love child of caramel and condensed milk. And this spread all over bread and devoured every morning for breakfast (or is it lunch? or dinner? who knows when you’re running on an Argentinian schedule…) After a cursory google search I learned that the prevalence of diabetes in Argentina is double that of Australia, which makes me feel a bit relieved that they don’t have some magical gene pool that allows them to eat pure sugar with no consequences. But there you still see very few overweight or obese people…

Mate – the only answer

Which brings me to my only possible answer. Yerba Mate. Mah-tay. It’s a loose leaf tea that is drunk from a special little cup (also called a mate) through a fancy silver straw. It’s known for its stimulant and appetite suppressant qualities. Argentinians drink this tea so religiously that they make British tea drinking look like a casual toke of a joint compared to the Argentinians’ full blown junkie-shooting-up-in-an-alley levels of tea addiction.

Everyone walks around with their mate cup and it’s not uncommon to see a thermos tucked up in the crook of their arm as they go about their day, refilling the mate as they go. I truly believe there must be some magical powers to this drink that stops them getting fat and allows them to never get 8 hours sleep and still function. I’m just waiting for some Westerner to catch on and market this to us Whiteys as the new weight-loss miracle tea (if any of you reading this does do that, I demand a cut of your profits).

There is so much more fascinating stuff about Argentina, like the fact that the whole country is pretty much built on immigration and everyone looks very European, or that the current period of 35 years is the longest they’ve ever gone without the government being overthrown by the military, or the way they idolise people with religious fervour (aka Eva Peron, Che Guevara, and Maradona). But I don’t understand it well enough to elaborate more than that! I’m not even sure the Argentinians could…

By the time we left Buenos Aires, it was time to go. We needed more than 5 hours sleep in a row, and we needed that sleep to start before 3 am. We also needed to eat some fruit and vegetables. And we were out of America dollars to change, which meant things were starting to get expensive. We had talked about the possibility of moving to Buenos Aires, we loved it that much. But after a taste of BA life, I don’t think I could hack it. Unless I could get on board the mate train…

Title Time: ‘Don’t Cry For Me Argentina’ from Evita. It had to be.