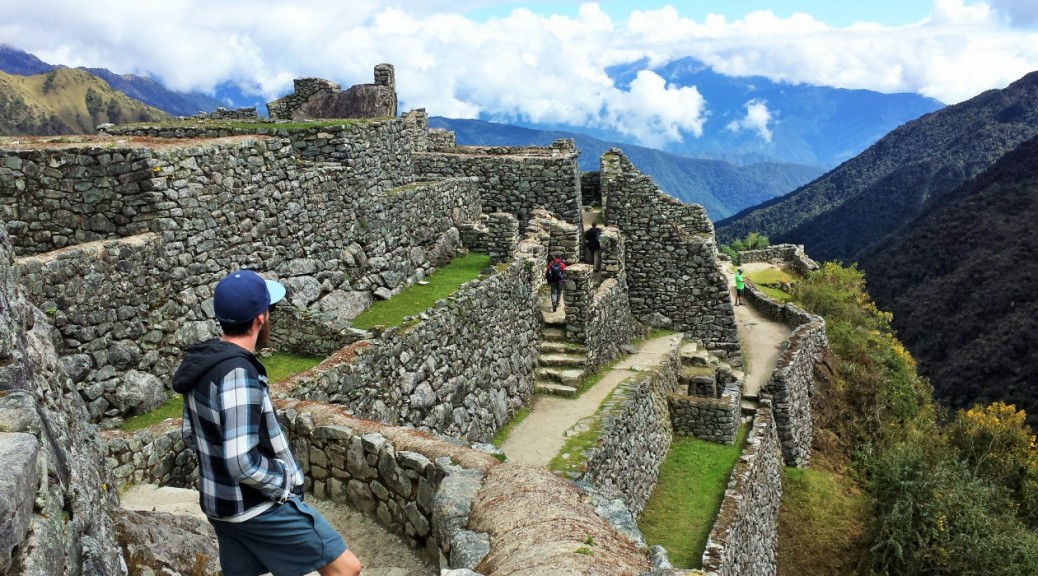 So, who’s ready for more HALF-THOUGHTS ABOUT PERU TOWNS

The centrepiece of the Incan empire was a bit of a personal fave. A rainbow flag hanging from every shop, but DEFINITELY NOT A GAY THING. Apparently it’s the Andean flag. Seems to me a certain mountain range is sitting stoically at the back of an unlit closet. Word is the sassy bastards gilded the entire city at one point in the 1400s. Presumably the gold was pissed off by tanked 15th century party-goers judging by the amount of old fellas leaning into walls around the square. A festival every weekend. We asked our Peruvian guide Elmer what one was for. ‘Just some more Jesus shit’. Got it.

The name looks like someone’s had a stroke over a keyboard. Or someone’s tried to transcribe a beatboxer. This is sort of where you start the Inca trail from though guys! Honestly about as cute as a town can be. It is catered to the gringo traveller set though, so a bit of the local charm is lost with people charging $7 for a kinder surprise. Watched Barcelona win the champions league. Was unmoved. But was provided with a reason to beer.

Already covered in a far more eloquent way than I could.

A city perched on the shores of Lake Titikaka. A funny name made even funnier for the fact ‘kaka’ said in an Aussie accent means ‘shit’. Lake titty shit feeds the black market electronics trade from Bolivia – in Puno you can pick up a 60” plasma for 2 chooks and a firm handshake. Ice cream shops on every corner which, for a chilly town sitting at 3200m, is an odd choice. Didn’t stop me indulging in a 4 scoop for the grand total of 45c though. Ate guinea pig. Low effort to reward ratio.

Got introduced to the reed people who are people who live on floating islands of reeds, get around in reed boats and sleep on reed beds. Reminded me of how the Flintstones made everything out of stones. They have to spend approximately half of their lives rebuilding their reed setup, because, as it happens, reeds are pretty biodegradable. Gave them a Stratco catalogue and let them think about their choices.

Had a homestay with a local family for a night on the shores of Lake Titikaka. Were welcomed by a three piece band that were assumedly a combination of tone-deaf and completely unaware that each other were there. We were then thrown into a game of soccer with the locals. Siz kept goal like David Seaman. Super glad I could reference David Seaman. Ended the festivities with a local dance that I was about 13 beers short of.

Stayed with Herman and Nelida, a local couple of about 60 who ran a small farm. Ate in awkward silence. Laughed and smiled at any word that was said, despite most of them probably being ‘look at these idiot no-spanish Australians’. Ate 9 different types of potato. Tended to a flock of mini-sheep. Spent 3 hours of Sunday morning with Freddy, a 7 year old, trying to sock pigeons with a black-market slingshot. Failed miserably.

So that’s it. Peru is dusted. But Fishy, what did you take from this 3 week squirt? Honestly, not much. As mentioned earlier, the tour structure didn’t allow us to strip down starkers and wade into the lake of local culture. We loved Peru, took shit-tonnes of pretty photos, and met some crown mint people, but to get a proper feel for the place we’d need to go back and do it on our own terms.

That said, Peru is an old fashioned stunner. The history and scenery are unbelievably unique and varied. The brief encounters that we had with locals showed how proud they are of their culture, and how keen they are to share it. The Inca Trail alone made it worth the spend, and if anything, we’ve just come out the other end with even more reasons to go back.