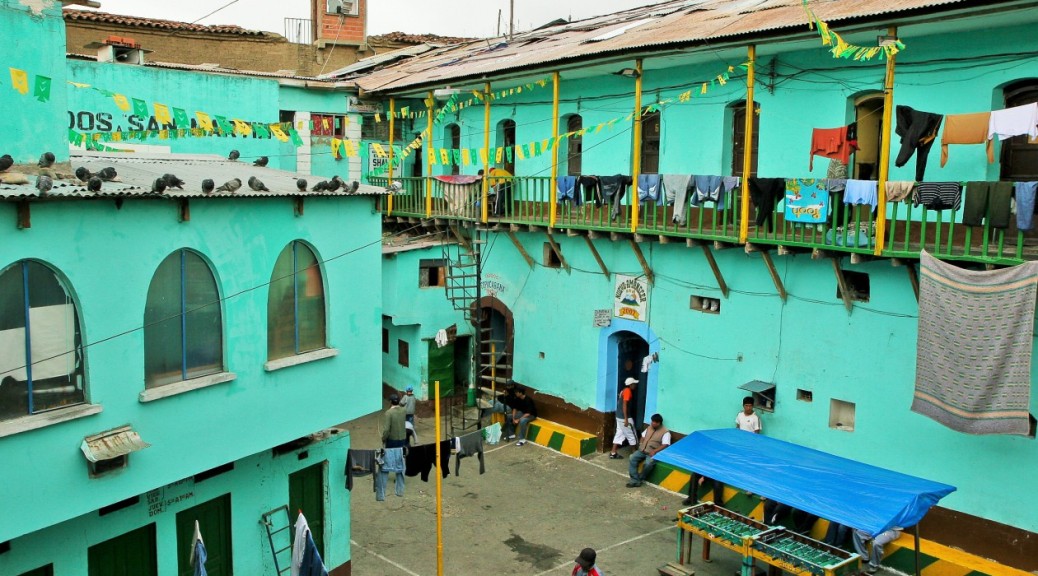 Never heard of San Pedro Prison? You can’t be in La Paz more than a day without it coming up in conversation. It’s rare to find a gringo who’s not read Rusty Young’s famous book about it, Marching Powder. Never read Marching Powder? Do yourself a favour and pick it up. It’s one of my favourite nonfiction books. It’s the story of a British guy, Tommy, caught smuggling 4 kilograms of cocaine out of Bolivia and his experiences being thrown in San Pedro Prison in La Paz. The story is absolutely incredible and captures the imagination of everyone who reads it.

San Pedro is a great subject for a book because, like many things in La Paz (dead llama foetuses hanging in shop fronts, for example) it is BIZARRE.

Let’s say you’re sentenced to San Pedro… When you arrive you have to pay to enter. Then you have to find somewhere to live (yes, inside the prison). Then you’ll have to get a job, because you have to pay rent on your cell. If you’re a big drug king pin and can afford $5000 a month, you can get yourself a lovely little two story condo with a Jacuzzi. What jobs are on offer inside the prison? Well, you can start up a restaurant (you can get a steak in San Pedro if you can pay the price), or you could be a cleaner or handyman for one of the richer prisoners. Or, you can work making cocaine. It’s a well-known fact that the best cocaine in Bolivia comes from inside of San Pedro. What if you’re a family man and you get sentenced to San Pedro? What will your family do and how will they live when you’re locked up? They move in with you. Wives and children live in the prison with their convict husbands/fathers. The kids leave each day for school and come back in the afternoon. It’s supposed to be medium security but due it being the prison of choice for Bolivian convicts, they’ve got an array of murderers, rapists, and other violent criminals who could pay their way into the prison. And the prison is located on prime down-town real estate on one side of San Pedro Square in the centre of La Paz. Also due to its popularity, San Pedro has four times the amount of inmates than it’s supposed to. If you’ve got the money, you can have whatever you want.

Marching Powder tells the story of how Tommy earnt his money by taking gringos on tours through the prison. If they paid the right price they could stay the night and party in the prison, getting bent out of shape on the purest blow Bolivia has to offer. Upon his release, some less honest locals tried their hand at the tour leading business but shit got super shady – girls were raped; people were bashed; some got stuck in the prison for weeks. It’s commonly known now that you just don’t do it.

However, a new kind of tour has emerged that everyone’s heard about… Head to the square at midday or 1pm and look for Dave and Alex. You don’t have to look hard because they’ll find you. Dave and Alex do a ‘walking tour’ outside the prison (they maintain that it’s not even possible to get inside anymore) and tell you about their experiences in there. That’s right, they’re ex-cons on parole making their money from gringos interested in hearing what it’s really like in there. It was certainly up there with the more absurd ‘tours’ I’ve ever done. Crazy Dave is a 50 year old junkie from New York who’s just got out after 14 years in San Pedro after being busted with 8.5kg of coke (he was supposed to make $70K off the enterprise). Ironically, when he arrived in San Pedro on his drug conviction, he started making the stuff to pay his rent. He quit after a few months because working with all that gasoline all day was bad for his skin.

Alex is Bolivian but spent a period of his life in California so speaks lovely English. He went down for his involvement in an armed robbery and his wife and three kids moved into San Pedro with him. I didn’t really learn all that much more about the prison from Crazy Dave and Alex, but they were certainly entertaining to listen to, and it was thrilling to know for certain that everything you hear is TRUE. Dave did most of the talking and Alex acted like a hype man:

Dave: “I have no idea how those guys escaped…”

And head nods and ‘hmmmm mmmm, yeah!’ in all the right places like a gospel church-goer. Very entertaining. They had stories about the few escapes that have happened over time; they told us about how they used to take tours before it got too dangerous (“I’d have 15 people crammed into my single room, one mirror with lines was going around that way; another being passed around the other way”); they explained that Tommy’s Israeli girlfriend in the book was made up for a bit of a love story through the plot. Crazy Dave’s left arm hung awkwardly out of his oversized Iron Maiden hoodie from where a guard had beat him up and broken his elbow. They insist they’ll answer any questions you have.

They work for tips so at the end of the tour we all gave Alex some Bolivianos to support his young family. Dave, however, asks you to please not give him money. This is where Crazy Dave gets most interesting and legends of which can be heard all of the gringo trail… Dave explains that he’s a junky and he’s been clean for a while now but he knows that if he has cash it will just burn a hole in his pocket and he’ll go and get high again. ‘Nawwww, what a responsible man who’s trying to get his life back on track’, we all think. If you don’t mind, he says, we can follow him up to the grocery store and help him buy some groceries. Lovely! We can do a good deed for the day! This happens with every tour: Dave gets an enormous tin of powdered milk and a couple of other bits and pieces. The total bill is split between 8 of us and we end up paying far more than I’ve ever tipped a walking tour guide. But no one minds because we’re doing a good deed.

The odd thing is that everyone who’s ever been on Dave and Alex’s tours has had the same experience. They do two tours a day… What does one man do with so much powdered milk?! Upon being asked that question, Dave explained that he buries it all under a bridge to save it. If he’s ever in dire straits he knows he always has some nutrition in the form of powdered milk squirrelled away. That must be a Golden Gate-sized bridge to be able to fit all that powdered milk under it though… No one knows what the deal actually is. Fish is sceptical and thinks Dave has an agreement with the supermarket and they split the profit they make from the overpriced milk. Dave seems to be awfully savvy on how to get your hands on good cocaine (he can help you out at the end of the tour if you like) so perhaps this is true. I’m an optimist and like to think that the man just really likes milkshakes, or does something creative with the tins.

Either way, I’d totally recommend hanging out with Dave and Alex for an hour – it’s certainly something to discuss back at the hostel. Just bring some groceries with you so you can opt out of the supermarket trip.

Rumours I’ve heard about San Pedro in the future include that they’re going to straighten it out because Brad Pitt’s made a movie of Marching Powder and Bolivia is embarrassed about it. On the other hand I’ve heard that they’re building new prisons out of the city, they’re going to shut San Pedro and turn it into a museum about the prison because gringos are so damn interested. We’ll see. One thing’s for sure: the intrigue of San Pedro is alive and well on the gringo trail and it won’t be stopping any time soon – the stories are too ridiculous and outrageous to be true but they ARE!

The title of this blog is from ‘Stranger Than Fiction’ by Bad Religion.