Ask yourself: What should I see in South America? If you are a normal person who is home to a normal brain, the first words to pass through your lips should be ‘The Amazon’.

We’ve been in South America 10 months. We’ve seen plenty of stuff – enough, it seems, to think it deserved its own URL. But somehow, somehow, we haven’t managed to check out the Amazon.

Like sands through the hourglass, so was our South American trip, and we thought it best to quickly fill in that blank on the CV. The Northern Peruvian city of Iquitos is a well-known gateway to the Amazon, and it was from there that we launched our 4-day 3-night attack.

Feeling about as much like an explorer as I have in my small town, cotton wool wrapped, supermarket-just-on-the-corner-there life, I decided to document our adventures as the most hardened and legitimate explorers and 12-year-old girls do – in the form of a padlocked and bedazzled day-by-day diary. Using ink squeezed from the offal of any wild jungle animals which I bare-handedly killed, and a pen fashioned from a wild boar tusk that still had the wild boar attached, I’d note down what could very possibly be the last of my thoughts that would ever be noted.

Day 1: Vili is a 22-year-old from a town just downstream who I would’ve assumed to be a local schoolkid had he not sat me down and explained in perfect English that he was in fact our guide. I then noticed not only a few sprigs of chin-whiskers, but also an air of good-blokedness that can, in all respect to Northern Peru, be a touch hard to find around these parts.

We threw our little backpacks in the car and rolled out of Iquitos, aiming for a town an hour downstream called Nauta. From there we took a boat for 3 hours and got to our little shack in the Amazon.

The little shack is actually quite a structure, with five separate buildings connected by boardwalks and elevated so as to avoid the worst of the wet season’s high water. All the bedrooms come with mosquito net lining on the walls, and a princess style hanging mosquito net above the bed. We scored a none too shabby matrimonial suite.

The asterisk that was put on our room was that, like all bedrooms in the jungle, we’d be sharing it. Tarantulas, bird-eating spiders and other hairy fucks whose names aren’t as memorable will be there, they said, but they do an awesome job of chewing other, more annoying insects, so rather than slapping them against the wall, just give them a gentle high five.

Vili invited us to jump on the little 4-man river boat that evening, and we went hunting. The Amazon is a wildlife free for all, so the 5 hour cruise was punctuated with ‘OH MAN LOOK AT THAT’ every five or so minutes. Appearances were made by birds, fish, monkeys and even a sloth.

‘You like Steve Irwin?’ Vili asked as it was getting dark. ‘Used to’, I replied, bowing my head for a respectful amount of time. ‘Check this out’, he chirped, turning and dry-rooting the front of the boat like a dirtier version of Winslet in Titanic. The boat then slowly turned toward the bank and I saw a pair of eyes flashing in the light of Vili’s headlamp. He reached out his hands, and as we were just about to hit the bank, he threw his arm down into the water. And came up empty.

This alligator hunting technique was employed for the next hour or so with (somehow) less and less effect, until we pulled up to a bank and went hunting on foot. Eventually a baby alligator was spotted in the shallows, and it was passed around to everyone, with assurances that the mum wasn’t too fussed with me taking a photo pretending to eat her kid.

Words might fail to do justice to the next 3 hours, and for reasons explained soon I was unable to take any photos. So I suppose I’ll just have to rely on my mad photoshop skills to tell much of the story. 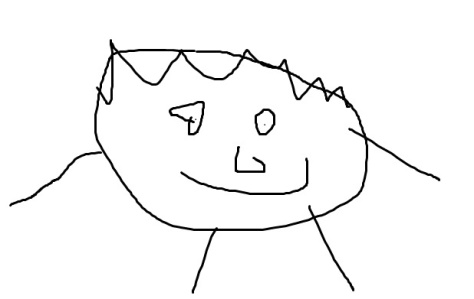 Look at the smile on the dial, the carefree attitude, and the fresh haircut.

Notice that you can’t really notice what you noticed before, due to the black dots which in this case represent FUCKING MOSQUITOS.

I’m sure, as Eskimos have their multitude of words for snow, so too would the Amazonian locals have the vocabulary to verbalise the mosquito assault that we experienced. Unfortunately, as I’m bound to the English language, the best I can do is WHAT. IN. THE. SALTY. FUCK.

You know how the cloud of black dots represents mozzies in the cartoons? That’s not for a laugh. That actually happens. It was as if we were lost in a fog, but the fog could bite you and give you malaria.

Precautions were taken – Vili gave us the shirts off his back, literally, and fashioned us mozzy-swatters out of palms – but they were relentless. Siz got bitten through her pants, I got bitten through my hair, and our jungle innocence got bitten, caught a venereal disease, and died. We lasted 2 hours out there, and they’d be up there with the most uncomfortable and disconcerting I’ve experienced. YES I’VE LIVED A PRETTY COMFORTABLE LIFE I’M SORRY.

So how do you pick up the spirits of two gringos who have had quite enough? Vili knew the trick.

Firstly, you take them to see dolphins. And not just any dolphins. Fucking PINK dolphins.

Noted as the most introverted of all dolphins, pink dolphins quite like a leisurely bottle of red and a game of patience on a Saturday night. This makes it that much more exciting when you get to see a pod of them rolling around hunting for fish. You may only see them pop up every few minutes (which makes photo taking impossible), but that’s more than you’d see pretty much anywhere else in the world.

From there we went to a local village, to a nondescript house with a nondescript family inside. Then Sizzle’s face went like this:

For the next 2 hours.

Q: What could possibly make Sizzle’s face pop just so?

A) A really big jar of peanut butter

B) A nicely ironed pair of ladies’ slacks

IT WAS A MOTHERFLIPPIN’ BABY SLOTH YOU GUYS. Around 18 hours before we arrived, the family’s pet sloth had totally given birth to a littler version of a sloth, often referred to as a baby. I don’t know what the correct word for a baby sloth is, but I’ll have a stab at a ‘jesuschristthecutenessistearingmyheartintwo’.

Like a junkie after a bender, Sizzle’s comedown was immense, but we walked it off in the village watching kids play soccer and people beginning to wind up for a big Saturday night. We soon bade the town farewell and headed back to the shack a bit after sundown.

Day 3: Piranhas. The king dicks of the animal world. It’s a well-known science fact that if you fall into the Amazon, by the time you float back to the surface you’ll be nothing more than bone and a pair of sunglasses that have hilariously/miraculously stayed on.

Fishing for piranhas then, should be easy. Got a finger that you don’t really like? Pop it in the water for a moment, and pull it back out again. Or, even better, use meat that’s not your meat.

Vili gave the okay to have a go at catching some, but swiftly began to squeeze the air out of our expectations. The river has dropped a few centimetres since we got here, he said, and the piranhas will probably be shooting upstream looking for deeper water. Nonetheless, we threw the rods in the boat, and headed out to a few secret spots.

Vili’s words soon came to pass though, and nibbles were hen’s teeth. After a couple of hours, and after a few hundred more mosquito kills, we packed up shop and started cruising back to the shack.

Vili and his assistant Gustavo, however, still had an ace up their sleeve. They turned off the engine halfway back to the shack and started slowly rowing along the bank of the river. Then Gustavo whispered for the spear. He wound up a few metres from the bank, and nailed a catfish. I was a combination of impressed and questioning my own manhood for the rest of the trip home.

It’s funny how quickly you get acclimatised to jungle conditions. 36C and 100% humidity – workable. 5 or 10 mosquito bites – nothing. Having spiders hovering over you while you try to number 2 – par for the course but also a perfect time to shit yourself. It’s not somewhere I’d choose to settle down, but the extremes seem normal after no more than a day or 2.

Day 4: One final dig. Before dropping the leaf codpiece and returning to civilisation, we had one last morning to jungle ourselves stupid.

We were both happy with just a final cruise around the place, but when whispers surfaced that a dolphin swim could be on the cards, I momentarily forgot about the Amazon’s piranha infestation and locked it the heck in. The piranhas remembered, Vili assured me that they don’t really like the open water, and would much prefer less grisly specimens than me anyway. I’m pretty sure he meant sexy. English is his second language.

So out came the rig and in it went to the water. The dolphins being shy as hell, I didn’t really get within 10 metres of them, but it was good to be able to say I had swum in the Amazon. It also provided the perfect occasion to bring out the old ‘I lost a finger’ trick, and while I can’t really remember the reaction, I’m pretty certain it would have been laughs and high fives all round.

And so, the curtain on our Amazon experience was drawn. While it is an amazing place with amazingly resilient people, I thank the big fella upstairs that 4 days was all we signed up for. The heat, the over-friendly wildlife, the denseness and noise – it’s an absolute assault on the senses. One that can overwhelm even the most hardy and attractive regional Australian boy.

It was nice, Amazon, but the palm leaf codpiece is moving into retirement.

3 thoughts on “The Amazon for Western Idiots”