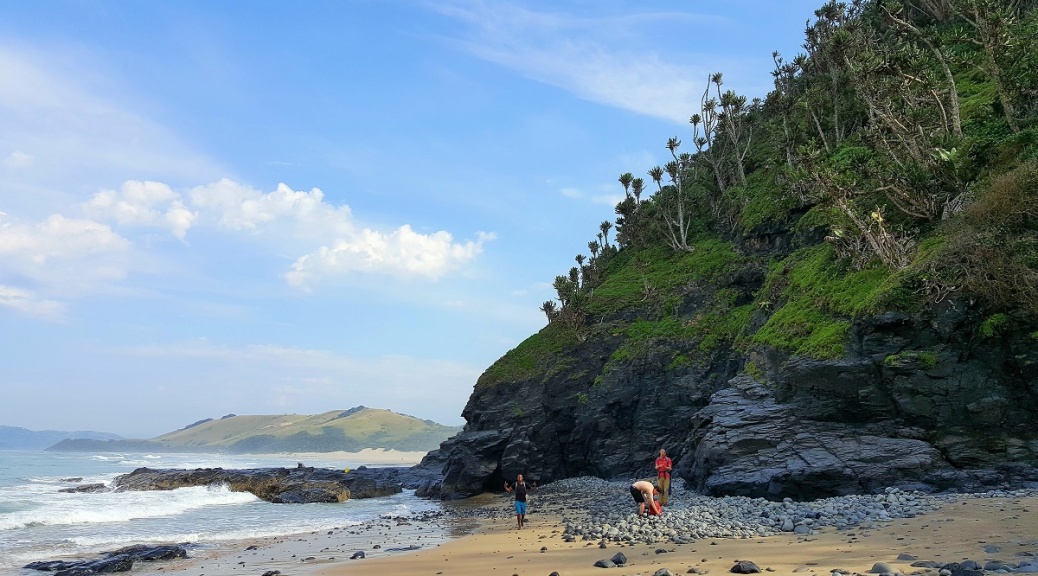 It’s been a while between shit hikes for this shit hiker. Hiking badly is an addiction for me, and the skin was starting to feel itchy. But where? Where on earth should I hike shittily next?

Experts consider South Africa to be the cradle of humanity; it has the earliest evidence of humans as we know them today. It’s likely where we as a species came down from the trees, straightened our spines into an upright position, and first strutted across grassy plains. It’s the motherfucking home of shit hiking. My mate Sharky* was keen to see what this part of the world was all about, so we made plans to hit it up, one-foot-in-front-of-the-other style.

*Disappointingly not an actual shark.

South Africa is a disgustingly diverse part of the world, so the options were many and varied. But one area stood head and shoulders above the rest. Depending on who you talk to it could be called The Transkei or The Wild Coast. Regardless of who you talk to, either name is a fucking cool one. It’s like being called Johnny Awesome by your family and Captain Fantastic by your friends. The Transkei or The Wild Coast – pick your freakin’ choice.

It was decided: we were gunna shittily hike the shit out of this joint.

Our hike stretched from Coffee Bay to Port St. Johns, although most hikers go from Port St. Johns to Coffee Bay. So I’m doing this guide from west to east, in what might be termed reverse order. If you’re thinking of doing this hike the dead boring normie way, simply flip this page upside down and read right to left.

Why would I, a fully capable human being, need a guide?

We rocked up in Coffee Bay confident that we could hike this sucker ourselves. How hard could it possibly be? You follow the coast, you stay in villages along the way, and you rock up in Port St. Johns 73km later.

You need a guide dudes.

You need a guide dudes.

Find your guide and strategise

While there’s a little bit of info online, your best bet is to just ask about a guide when you arrive. The bloke on reception at our hostel said he knew a guy, and our guide-to-be Portso rocked up at the hostel high as a kite that night to chat shop. We settled on a price below that which was shown on the internet (about 400 rand per day rather than 550) which included everything bar lunches and beers.

We fell down a little on strategy though. We ended up joining a German who had already teed up the hike to leave the next day, which was perfect for us, but he wanted to do it in 4 days rather than the recommended 5. Being the ultra-endurance athletes that we are the Shark and I were more than happy with this, but the staggering of these days left a lot to be desired. The 73km was divided as such:

Day 3 was an absolute bitch. 27km might not sound ridiculous, but when 75% is up steep hills and down steep dale,s it feels like you’re hiking to the friggin’ moon. Which would have in fact been easier thanks to the weightlessness granted by the wonderful vacuum of space.

There was no good explanation as to why the cows spent so much time on the beach. Portso said they drink the salt water because it’s good for their skin, but a) I don’t care if you’ve got four stomachs, salt water makes you spew and b) it’s not often I see a cow in the skin care aisle of the chemist concerned about their latest breakout.

Fever dream flashbacks to running with the bulls aside, I give beach cows a rating of 8/10 on the Official Fishy Kewl Scale™.

Ask to see the weed village

Portso is a wake and bake kinda guy. He wasn’t a fan of plain oxygen, he preferred his flavoured. The dude was just constantly high, but in the most endearing way possible.

A few hours into day 3 he points to a shittily constructed fence. It was weird because for all intents and purposes the Transkei is fenceless – the land is controlled by village chiefs and shared communally. ‘Weeeeeeed’, Portso drawled with a grin.

The next few kilometres of hike were eye-opening. An entire village’s economy was built around the production of weed, which was shipped out to all corners of South Africa. Perhaps half of the land was devoted to production, women were walking down the road with huge bales of weed balanced on their heads, and Portso was in absolute stoner heaven. Like all the best stuff in life I wasn’t allowed to photograph any of it, so I guess you’re just gunna have to trust me. Like I told my supermodel girlfriend while I was buying a yacht the other day, I never lie.

Place names can be misleading. Anyone who’s been to the Adelaide suburb of Paradise can tell you that. But somehow The Wild Coast delivered, and it delivered in a big way. Pristine beaches with absolutely no one on them, rolling hills that I half expected the Von Trapp kids to bust out a tune on, and locals who, in a total switch-up from the major South African cities, were just pleased as punch that you were visiting.

Whether shittily or otherwise, you need to hike the Transkei.