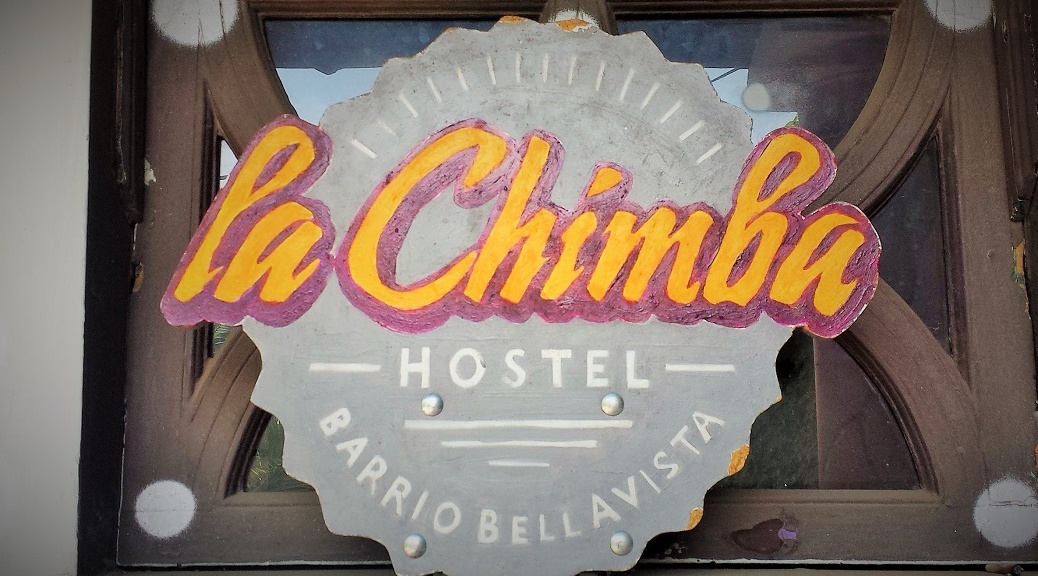 Are you in the market for a hostel that you feel not-quite-cool-enough to stay at? Have I got a treat for you.

Hostel La Chimba sits in the ultra-cool Barrio Bellavista area of Santiago, a place with so much graffiti I’m pretty sure the buildings are now relying on the paint for support. Thankfully the footpaths are well paved, as you’re not spending much time looking where you’re heading.

Turn down Ernesto Pinto Lagarrigue, and you’ll see a building that’s slightly more popping than most others. A blue, pink and purple monster, this is a book that you can happily judge by its cover. Close your eyes and imagine what goes on indoors. I think you’ve got it.

Back in 2006 La Chimba was named as the best hostel in Latin America. There’s a lot of hostels in this part of the world. That’s quite the effort. And when you get there, you can see exactly why they won it.

Firstly, the place is HUGE. It’s made up of 2 main buildings, with a small shack in between.

The main communal area and kitchen is out the front, also housing the receptionist desk. It’s the little touches that make this area work. There’s a bike hanging from the ceiling. There’s a pinball machine in the corner. There’s quirky paintings dotted here and there.

While most of the dorm beds are upstairs out the front, your privates reside in the building at the rear. And the vibe is different out there. More dark, more mysterious.

There’s a pimp dining table that is perfect for communal meals. You’ve got a separate kitchen in this section that is more than up to the job.

The showpiece of the back building though is the pool table. It looks like something out of a speakeasy. It’s the exact opposite of the wonky trestle-table options provided by most other hostels. WE’RE TALKING HARDWOOD, DUDES.

But for us, the people made the place. Lucas at reception was an absolute star, giving us the most on-point recommendations and doing so with the biggest Austrian smile you can imagine.

The hostel is super conducive to people talking to people. It’s a meeting place. It’s a laughing place. It’s also a place that doesn’t sell alcohol, but is very keen for you to bring your own bottle of plonk in. These guys know what’s up.

La Chimba was an absolute delight. The place somehow lives up to the massive statement made by its looks. It’s as fun and awesome as the graffiti on its walls. Somehow.

If you’re looking to get involved in the La Chimba fun, hit them up on their website or Facebook page.