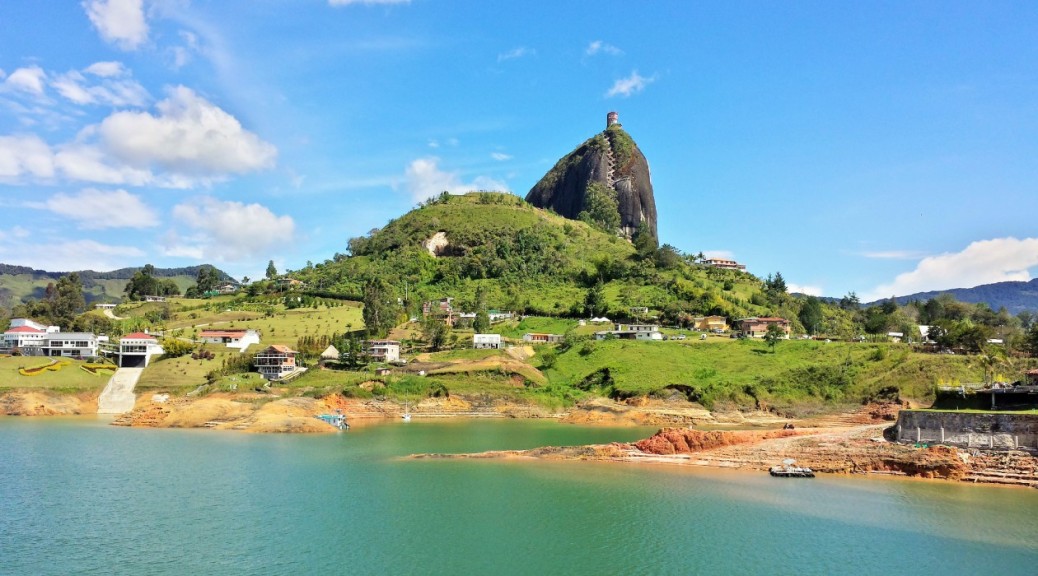 When travelling Colombia, you’re going to be pointed to a couple of places straight off the bat – ‘Ooh, the Caribbean Coast’ they’ll say, or ‘Oh my stars you need to check out Medellin you sexy bastard’. And too true, these places are grouse, rad, and any other 80s slang for good you can think of. But being intrepid as shit, we threw the scrunched up metaphorical map back in the metaphorical face of this advice, and headed country.

Sizzle being from a town of 300 (if a couple of buses break down on the way through) and I being a kid from a throbbing 1000 strong metropolis, the hustle and bustle of a big city or a tourist haven tends to wear us down. Thankfully, Colombia has a shit ton of options if you’re into seeing mother nature in her intimates.

EXTREME. This is all that we were told about San Gil prior to heading there. EXTREME. IT’S HARD NOT TO SHOUT IT. Nestled in the mountains of the Santander region, it’s made it’s name as the adventure capital of Colombia. There’s 40,000 people squeezed into a cute little town that is a hot mess of old world charm. Cobblestone streets, old fellas having Tuesday morning beers while getting their loafers shined, Virgin Mary statues that have needed a lick of paint since 1983, it all comes together in exactly the way you’d hope. And the slow, chilled façade works magnificently as a counterpoint to the tourist activities, which, as I mentioned, are FUCKING EXTREME.

Canyoning. For the uninitiated, it’s as simple as getting dropped at the top of a canyon, and by whatever means necessary, you make it to the bottom of said canyon. In our case it meant starting with a spot of caving. If you were to ask me prior to San Gil ‘What is blacker than black?’ I would have answered with ‘don’t be a fuckwit’. Now I’ve changed that answer to caving. We had the benefit of headlamps for the most part, but every now and then, while we hung with bats, the lights would go out and we’d drop into what I assume the inside of a black hole looks like. From there we returned to daylight and abseiled down a couple of sizeable cliffs, rock climbed more minor drops, and finished with cliff jumping into a rock pool at the bottom. My triple salto with pike scored well with the Colombian judge.

We also knocked over some rafting, tackling rapids ranging from levels 1 to 5. Without knowing much about the ratings system, I’d convert that on the poo-yourself scale to 1 being a pop-off at your Nan’s place and 5 being thick spread vegemite in the briefs. There was a 30 minute safety demonstration at the start that had everyone worried that there would be a pile of cadavers at the finish line, but as long as you’re in control of your faculties there isn’t too much to worry about.

Colombia has a big rock. It’s called El Penon, which, creatively, is Spanish for ‘the rock’. It’s about 220m tall and 350m long, like a junior Uluru, but the landscape around it is the duck’s nuts. It’s located outside the township of Guatape, which is a town that was built in the 60s after a man-made lake was created to run a hydro-electric dam. The town could be seen as the antithesis of San Gil in that there’s no real history to speak of, but that has allowed them to create their own super unique aesthetic. At the front of every building you’ll find three dimensional tiles with pictograms of whatever tickles the building owner’s fancy. And the colour schemes are hyper, not only on the tiles but the entire buildings. It gives the impression they’ve tried to paint the entire town using whatever free sample packs Dulux have handed out. But in a yuck good way.

But what made Guatape more than anything for us was the hostel we stayed at. Sean is an English lad who’s set up a hostel right under the rock with his Columbian missus, and it is a peach of a place. You’ve got the rock out the front, the lake out the back, and home in the middle. If not for the fact we have to go to friggin’ Peru to see some friggin’ Inca stuff, I’d have stayed forever.

TRY TO BE NORMAL FUCKING ASSHOLE

THANK YOU FOR NOT STAING