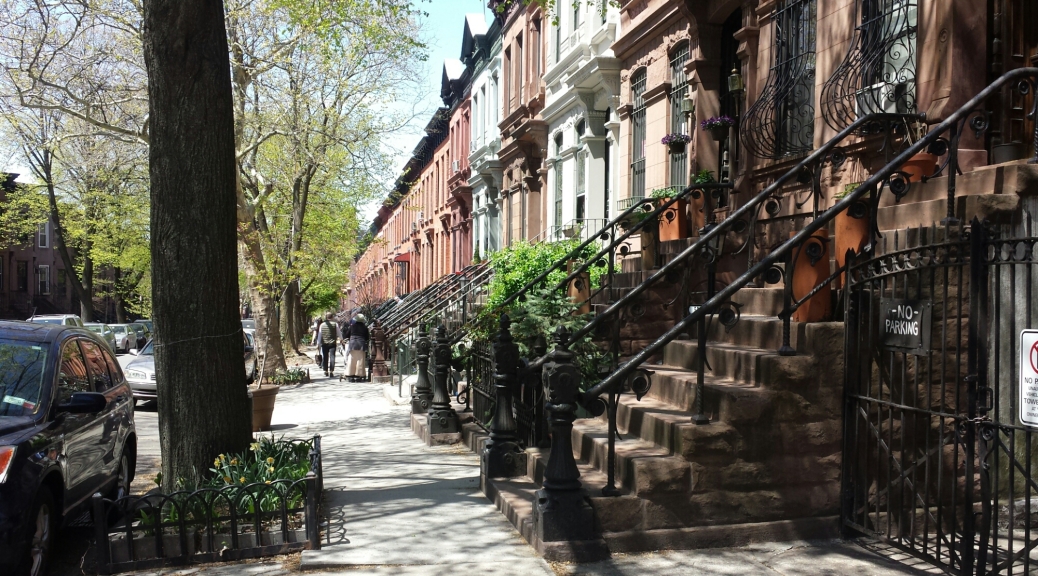 Let’s discuss the title straight up – New York I Love You But You’re Bringing Me Down is a bloody brilliant song by LCD Soundsystem, an iconic NYC band. Also, it’s the best way to describe my time in New York due to the fact that it was impossible not to compare New York to London, and it just made me wish even more that I was living back there.

We Couchsurfed at a sharehouse in Brooklyn in an area that looked so much like Manor House (where I lived in London) – the plain brick buildings; ethnic convenience stores; middle eastern fast food. The subway system was a sub-par version of the London underground – it was hard not complain that the Underground was cleaner, more comfortable, more frequent, and far more user-friendly. Some places looked a lot like London, we would often be saying “this is like Shoreditch”, or “this is like Shepherds Bush Empire”.

We went to see The Wombats on Monday night for $18 (they were amazing, by the way) and we could’ve seen Ben Folds on Thursday for $30 but got lazy and didn’t (we had to be up at 4am for our flight to Colombia). That was what London was like.

Ok! I’ll stop whinging! Honestly, I did love it, it just made me sad that I live in a country with beautiful weather and personal space where it’s easy to drive a car.

We did a walking tour of the Financial District straight up which was a great way to learn about the history of New York. The only thing I really knew was that “old New York was once New Amsterdam” because of that really old song that They Might Be Giants covered that one time, “Istanbul was Constantinople”. Probably my favourite fact was that the word Manhattan comes from the language of the indigenous people who lived on the island when the Dutch East India Company turned up and settled it and 25% of the buildings were pubs. Manhattan comes from their word which I can’t spell which means ‘place of general inebriation’. That’s pretty funny.

We visited Grand Central Station, which of course I was likening to Victoria station, until we actually got there and it was actually really beautiful and I totally see why people go and look at it. The Chrysler building is just next to it; as well as The Rockefeller Center and The Empire State building. We went up neither of these buildings to enjoy the views of the city because we’re tight-arses.

We walked to Times Square and were overwhelmed by the amount of people and wasted electricity. I got sad about not being able to see any musical I wished whenever I pleased. God I miss London. We laughed at the ridiculous people dressed up in costumes that are supposed to look similar enough to a famous character (aka Hello Kitty or Iron Man) to get tips from tourists wanting a picture; but not so similar as to attract a lawsuit.

We visited Chelsea Market and bought a picnic which we ate as we walked the Highline (a disused railway line that’s been converted into a paved-and-gardened walkway above Chelsea and the Meat-packing district). We rode around Central Park and then returned on foot to see the bits we missed (Strawberry Fields; Belvedere Castle). Fish preferred Hyde Park but I have to admit that I was quite taken with Central Park, especially the beautiful magnolia trees.

We weren’t organised enough (a recurring theme) to have bought tickets to any theatre shows but I’d heard about getting last minute lottery tickets. I really wanted to take Fish to see The Book Of Mormon, a musical written by Trey Parker and Matt Stone, the writers of South Park. I saw it when it opened in London and I can’t stress how much I loved it and it is also boy-appropriate (not that musicals should be for women only, but when you date a guy from Jamestown you have to be sensitive to some old-fashioned ideas). It’s so popular that it sells out way in advance and tickets are sooooooo expensive. So we lined up at 4pm for the lottery and standing room seats. There were already about ten people in front of us. The line grew and grew and at 4:30 a chap from the box office came out with little cards to write your name on and enter the lottery. 6 lucky people would have their names drawn out and from there could buy two tickets for $32. The seats are 12 special seats reserved in the front row just for lottery winners. Other people in the front row pay $300 to be there.

There was a crowd of about 100 people by the time the lottery was drawn at 5pm. There was so much anticipation, it was like a reverse Reaping from the Hunger Games. The guy who pulled the names out created a bit of theatre about it so it was fun in itself seeing how it worked (because they never do this lottery business in London!). We were no Charlie Buckets, we didn’t win the Golden Tickets. But we had our place in the standing room line. So when the lucky bastards who won the lottery had bought their tickets, they opened up the ticket office for the first 25ish people to buy standing room tickets. We got them for $27.

By this time it was 6pm, we’d been on our feet all day and were about to stand for another three hours to watch this show. We scarpered to the nearest pub for a pint and a burger (bless the Irish heritage of North-East America, we’d been hard pressed to find a pub up til now) before getting back to the theatre for the start of the show at 7. I was nervous that I’d built it up too much for Fish (and the other people whom we’d befriended in the ticket line). Thankfully, he was impressed and there were some legit LOLs coming from him. If you thought Team America World Police was funny, Book Of Mormon is next level. And more inappropriate. What made it even better was that the standing places were actually up against the railing at the back of the stalls (the stage-level seats, for those not in the know of theatre lingo). We were resting just behind the people who’d paid over $200 for their tickets.

When the show was over we were having a chat to the people who’d been next to us in line earlier – a bunch of Aussie doctors from Melbourne and a gay couple from Clapham, one of whom played in the house band at Venn Street Records in Clapham Common (a great bar in south-west London). When they’d been walking back to their hotel to get changed before the show, the Aussies had bumped into a ticket seller on the streets who’d sold them cheap ($30) tickets to a late-night comedy show at Jerry Seinfeld’s comedy club where Tina Fey was appearing that night. I do love Tina Fey. If anyone is a fan of 30 Rock I urge you to watch The Unbreakable Kimmy Schmidt – Tina Fey’s new show which is freakin’ hilarious and I got addicted to it on Mary and Kosta’s Netflix. We were so tired and the show wasn’t on til 11pm but it was TINA FEY. Fish The Accountant even said that the budget could allow it. So we walked to the venue to see if we could get tickets. The dude on the door said that it wasn’t sold out so if we just came back at 10:30 we’d be fine. Awesome! We got a pint, came back at 10:30, managed to get tickets for $20, and then realised that the venue was tiiiiiiiiiny and immediately we became suspicious (would’ve been great if we’d become suspicious an hour earlier). How naïve we were. There were 4 stand-ups of varying quality (they would’ve been great if it was an amateur comedy night at Rhino Room; not when you’re expecting Tina Fey) and about 90 disgruntled punters which dwindled rapidly once they all dawned that no famous comedian was coming out. Turns out the ticket sellers on the street say any comedian’s name and it’s up to the purchaser to be savvy enough to know that that’s bollocks. And our Melbournian Doctors weren’t and we didn’t twig until too late. To add insult to injury there was a two drink MINIMUM and the cheapest drink was about $9. It was funny reading the TripAdvisor reviews of Broadway Comedy Club after that.

We spent a day in Brooklyn as well, following recommendations from Danny and Alisha who used to live there. Prospect Park was pretty cool – apparently if Central Park is New York’s front yard then Prospect Park is its’ backyard. There were more pretty flowering magnolias. We had awesome banh mi for lunch from a legit Vietnamese café (if there’s one thing we’ve been missing more than a chicken parmi it’s a dog roll). We walked over the Brooklyn Bridge, saw the Statue of Liberty in the distance, then cruised on to Williamsburg (much like Shoreditch – commercially hipster. If you want your cutting-edge Dalston-level hipster you have to go all the way east to Bushwick). I couldn’t resist flicking through some vintage shops so I released Fish for half an hour so I could browse and dream of more luggage space without feeling guilty watching him play on his phone while sitting on The Boyfriend Chair. When we reunited the little sweetheart led me to a park and produced a bottle of wine and plastic cups for us to enjoy in the late afternoon sunshine. Just to make it really feel like London. Sometimes there’s a little flicker of romance that gives me hope that my choice of partner isn’t totally Freudian. In the evening we hit up a couple of bars in Williamsburg that’d been recommended. Best of all was Anaconda Lounge which gave you a free pizza with every drink you purchased. That’s a travellers dream if ever I’ve heard one! We ate 6 pizzas and their matching pints while watching the Brooklyn Nets NBA playoff game (cos we’re hard out basketball fans now, haven’t you heard?).

Another day was spent vaguely following Stacy’s Perfect Day In New York suggestion (we had to split it because it involved the Highline and Chelsea Markets which we did a different day) through SoHo; Nolita and Greenwich. New York has this funny but logical way of naming areas by abbreviating a description of their location. Nolita is North Of Little Italy. SoHo is South Of Houston. Tribeca is Triangle Below Canal. Dumbo is District Under the Manhattan Bridge Overpass. We had to miss out on Balthazar’s restaurant which was recommended by Stacy, Katy and Misha, because, you guessed it, we’re tight-arses. We got take-out (because we’re in American so it’s not take-away) thai for dinner and had an early night before our 8am flight to Colombia.

All-in-all I liked New York. It was hard to scratch the surface in just 4 days, but I liked what I saw. Considering I’m not welcome to live in the UK anymore I’d definitely consider moving to New York for a stint. I feel like it’d be one of those cities that the more you know of it the more you love it. Just like London.